‘By conveying the new richness of debate and methodology, Landscape, the Richest Historical Record summarises the study of landscape history in 2000 as successfully as Hoskins’ overview of 1955’. 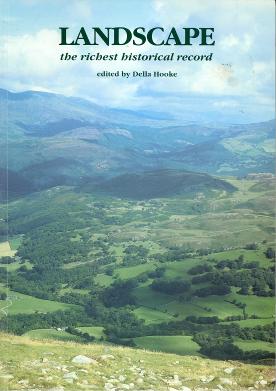 Abstracts from this volume

It has been difficult to understand the evolution of the prehistoric landscape because the evidence from the Neolithic and early Bronze age is dominated by specialised forms of monuments and that of the later Bronze Age and Iron Age by settlements, enclosures and field systems. But that problem arises more from different traditions of research than from differences in the material being studied. One way of providing a more integrated study is through considering the symbolism of different kinds of monuments in relation to the landscapes in which they were set. This suggests that we might think in terms of three successive phases in which ritual and everyday activities were closely connected with one another. The first consists of traditions of monuments that recalled an ancestral past, real or imagined, in Continental Europe. The second involved monuments whose prototypes were to be found in the natural topography of Britain itself. In a final phase the main focus of symbolic elaboration was the house.

Quaternary scientists, archaeologists and historical geographers have a history of working together on landscape and environmental studies. This paper deals with the Outer Hebrides – an area which is perceived by many as featuring a rather homogeneous landscape, in spite of its geographical variability. The archipelago has predominantly peat-covered uplands and lowlands, with a narrow, mainly western, coastal fringe of sandy, calcareous grassland (machair).

The persistence of this ‘landscape’ over the last tem millennia was thought to have been confirmed in 1979 with the publication of a paper on a site in Lewis which presented evidence for a sustained grass-sedge-heathland in which woody plants played a minor role. The two decades since then have seen much palynological research from the Outer Hebrides. Surprisingly, much of this work paints a very different picture: one where woodland is likely to have been a major entity; where the spread of peat, in places, has been a feature of only the last few thousand years; and where human activity from Mesolithic hunter-gatherers to Neolithic and post-Neolithic agriculturalists, is arguably evident.

In this paper, the changing vegetational landscapes of the Outer Hebrides are examined together with a consideration of archaeological distributions. It is shown that woodland persisted, in general, for the first half of Postglacial time; that woodland reduction, from either natural or human causes, and highly variable spatially, was taking place at the same time as a human presence can be demonstrated; that fire is likely to have played a major role in promoting the development or maintenance of heathland; and that agricultural activities have led, in some locations, to major phases of soil erosion.

The importance of data limitations is emphasised, but palynology has the ability to reveal whole landscape changes, both natural and anthropogenic, as part of unbroken time series, something which is inaccessible by purely archaeological means. Like much interdisciplinary research, archaeological and environmental studies can complement each other extremely well and the results emanating from the Outer Hebrides seem to justify the energy involved in their production.

The evolution of the Romano-British landscape and the relationship between urban and rural economies is investigated. The contribution of the late Iron Age social and economic framework is discussed together with subsequent change in the structure and organisation of the rural landscape in association with the political and administrative reorganisation of the province.

In recent decades new light has been cast upon the impact of the Anglo-Saxons in England. This chapter examines the concept of continuity and discontinuity through the use of documentary, place-name, archaeological and palaeoenvironmental data integrated with evidence from the landscape itself.

The nature of the earliest monastic foundations and the expansion and distribution of the monastic orders in Europe are considered as a background to the locations and forms of Celtic, Anglo-Saxon and post-conquest monastic settlements in Britain. Approaches to the study of the impact of the monasteries upon the wider landsape through the management of estates and granges are summarised.

This paper traces the evolution of settlement and landscape change in the valleys of the Pennine and Lake District hills across the medieval period. The status of these upland areas as hunting forest or free chase meant that the strategies pursued by the great feudal landholders determined the direction of change. Two contrasting types of forest are identified, the ‘closed’ forests dominated by demesne stock farming, and the forests open to peasant colonisation. Much of the central Pennines was dominated by demesne cattle farms (‘vaccaries’) or monastic stock farms where upland pastures had been granted to monastic houses. Leasing and subdivision of both lay and monastic stock farms in the later middle ages led to the growth of the small hamlet settlements which are typical of the dales. Elsewhere, in ‘open’ forests, the lords allowed grazing and settlement by peasant communities by the thirteenth century. Seasonal occupation of shieling grounds developed into permanent settlement as peasant communities carved new farms from the valley sides. The paper concludes by exploring the dynamics of landscape change in the medieval uplands, relating the contrasting origins of settlement to the progress of enclosure and the pressures on woodland.

Peoples of wood and plain: an exploration of national and local regional contrasts. Brian K. Roberts and Stuart Wrathmell

This paper reiterates the importance of observing traces of historic and prehistoric human activity – expressed in the distribution of material remains – within the contexts of woodland and open land, and shows the analytical power achieved by placing a regional study within a national perspective. Data from Domesday Book and place-names allow a national reconstruction of woodland and cleared land in the Anglo-Saxon period, and comparison with the distribution of rural settlement in the mid-nineteenth century points towards powerful causal linkages. A short study of the West Midlands argues that the boundaries between woodland and the open land were already well marked at the time of the Roman conquest – originating earlier – and that the patterns then present were part of landscape developments for over two millennia.

This paper examines developments in understanding the landscape of towns since the 1970s, the role of rescue archaeology resulting from urban growth in the 1960s–1980s, and the effect of urban conservation planning. The introduction of town-plan analysis in a British and European context is also discussed.

The eighteenth and nineteenth centuries saw the real ‘making of the English landscape’ with the demise of traditional farming pays and the emergence of a simpler pattern in which the largely arable south and east is contrasted with the largely pastoral north, west and midlands. The impact of agricultural change on the rural landscape is explored, together with the way that such change influenced our understanding of the medieval and post-medieval periods.

Post-medieval and industrial landscapes: their interpretation and management. Marilyn Palmer

This paper discusses the attitude of landscape historians and archaeologists towards industry in the landscape. It emphasises that industrial activity was a feature of many landscapes, urban and rural, and looks at the importance of continuity as well as change in industrial development, taking example from the textile and mining industries. It considers the problems of recording and conserving industrial landscapes in the face of environmental pressures to reuse derelict and contaminated land.

The discovery of landscape. John Chandler

This paper summarises academic and lay attitudes to landscapes from the medieval period to the twentieth century. It explores the process of discovering the history of landscape, including late medieval and Tudor travellers, the development of cartography, the landscape element in county and regional historiography, the growth of antiquarianism, the Victorian climate of nostalgia for vanishing landscape through to the work of landscape pioneers and the marriage of disciplines.

Changing trends in landscape history are examined: from an initial concern with the influence of humans as expressed physically and visually in the landscape there has been a growing concern with both human cultural impact and our perception of the environment. There has beenan awakening across Europe of an interest in protecting Europe’s cultural/historical landscapes, an aspect in which the landscape historian should play a prominent role.

The plus fours in the wardrobe: a personal view of landscape history. C. C. Taylor

The development of landscape history as a proper discipline is traced from its somewhat simple beginnings to the complexities of modern scholarship. Some of the problems of definition and of incorporating material from other forms of study are examined. The paper ends with some personal hopes for the future of the subject.

Registered Charity in England and Wales No. 278393